Step back in time to 1940 and think of the statement “She’s a strong woman.” Just what did that mean back then? It may have been a positive statement lauding this woman’s ability to overcome adversity, or it may have meant that she was outspoken; overstepping the bounds of demure womanhood.

Fast forward to the 60s and “She’s a strong woman” would probably have made her a bra burner.
Either way, neither of these scenarios was expressing anything about physical strength.

Back in the 40s it was considered to be very unattractive for women to sweat. Searching the internet for women’s fitness photos from the 1940s I found this.

Then in the 60s the vibrating belt that claimed to “melt your fat away” became a mainstay in women’s spas and health clubs. It was thought that the jiggling would disrupt and melt away the fat.
We actually had one of these things in our house and it did jiggle your fat and it tickled.

Now fast forward to 2013. I know some women who possess superior physical strength. I take a core strengthening class on Sundays and the instructor for this class is insanely strong. 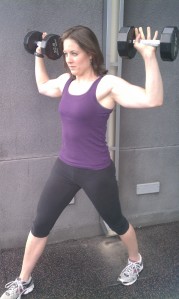 Karen is the most positive, friendly individual you will meet. She smiles and chats as she leads the class through squats and lunges and push ups and crunches. Then we add some dumbbells and run through that set again. Her classes are 90% women sweating attractively and happily. 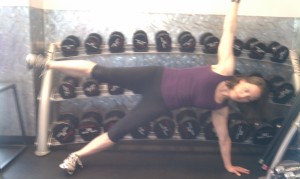 Karen and her class make me a much stronger woman mentally as well as physically. This class is hard work and even though I have done it a dozen times I really have to push myself mentally to wrap my head around what Karen is so nicely asking us to do physically. 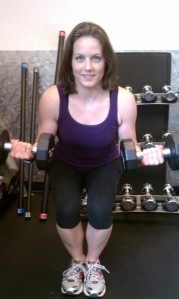 Isn’t it fabulous to live in this time when women’s physical strength is so encouraged and appreciated? Lets take advantage of this opportunity to sweat and get strong together!